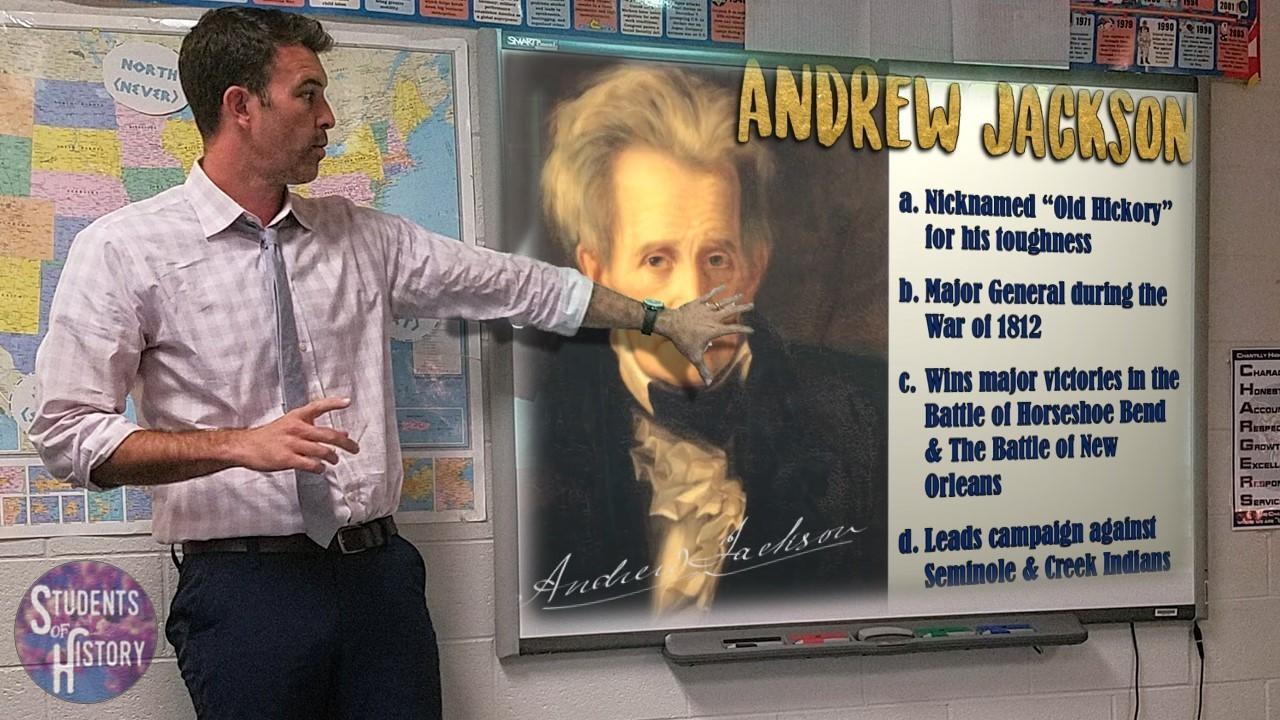 Andrew Jackson is one of the most important figures in US history. In fact he's the only person to have an era named for him: The Age of Jackson.

As a result, you want to make sure you cover the essential understandings students are going to need to know about the Andrew Jackson presidency based on your state standards, but also make your lessons engaging and hands on so students really connect with the material.

I spend about 2-3 weeks on the Age of Jackson in my American History classes. We look at the rise of the Common Man, Spoils System, the Indian Removal Act, Nullification Crisis, Jackson's war on the National Bank, and other important events of the period.

Here are five awesome activities that you might want to use to teach about Andrew Jackson:

Jackson and John Quincy Adams had two contentious presidential elections in 1824 and 1828.  In the 1828 election, each had a theme song that they used her campaign events. These campaign songs can still be listened to today by students and give an excellent perspective on how each viewed themselves and their opponent.

Jackson song is titled, “The Hunters of Kentucky” and was intended to show Jackson’s bravery and heroism as well as that he was a man of the people and a regular guy from the American frontier. The lyrics include:

“But Jackson, he was wide awake,

And was not scared of trifles;

For well he knew what aim we take

With our Kentucky rifles”

Adams’ campaign song was titled, “Little Know Ye’ Who’s Comin” and is not shy at all about how it portrays his opponent in the election. Adams’ strategy was to show that Jackson was not fit to be president. The song makes varied threats about the horrible things that will happen if Jackson is elected. These include:

Pistols, guns and knives is comin',

If John Quincy not be comin'!

I provide students a worksheet with the lyrics to the song on them. Then we will listen to the songs and students can follow along as we listen. Students can take notes on the imagery they get from each song and explain the message behind each.

A great extension activity afterwards is for students to design either a matching campaign poster or video to go with the song.

There’s a lot of important content and background knowledge students need to understand about Jackson and this era in order to complete a project or some of the other activities. A great way to provide this to students and save class time for more interactive activities is to “flip your class”. 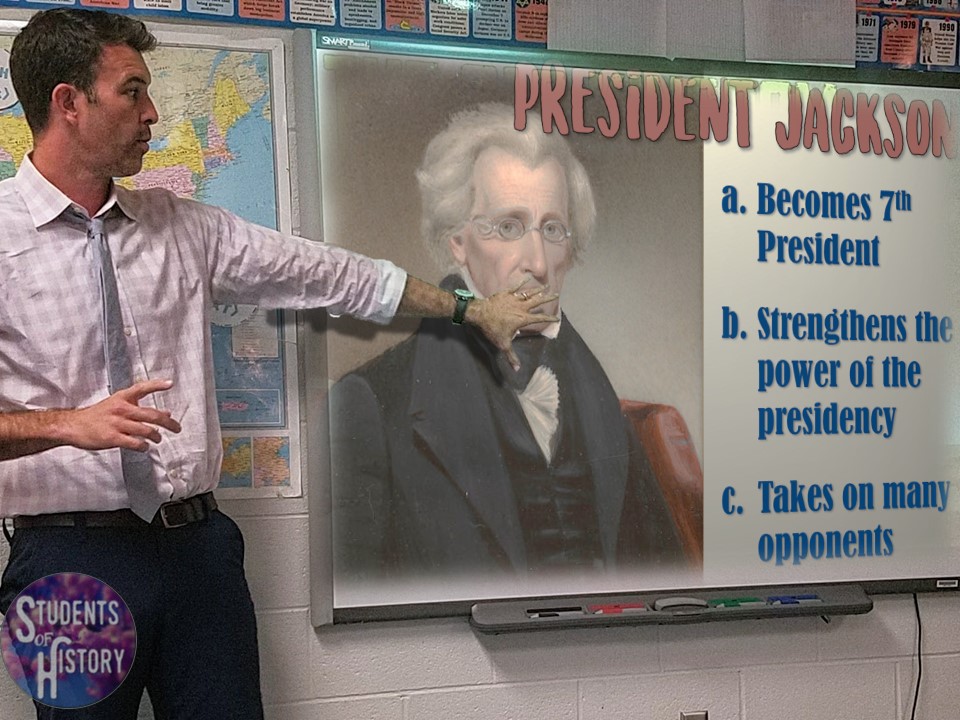 A “flipped classroom” approach has students watching a traditional class lecture or other video online for homework and saving class time for projects, cooperative learning activities, or primary source analysis that the teacher can help students with.

I assign this Age of Jackson Flipped Classroom video I made and have them complete the guided outline notes worksheets as they watch. This way, I know they heard the key concepts and we have more time for the extension activities in class.

I’ll ask questions as I move around the room during the next project (below) to ensure that students completed the assignment and understood the notes that they took.

This is one of my favorite projects to do in US History because it so fits the person we’re covering and is something creative and original. 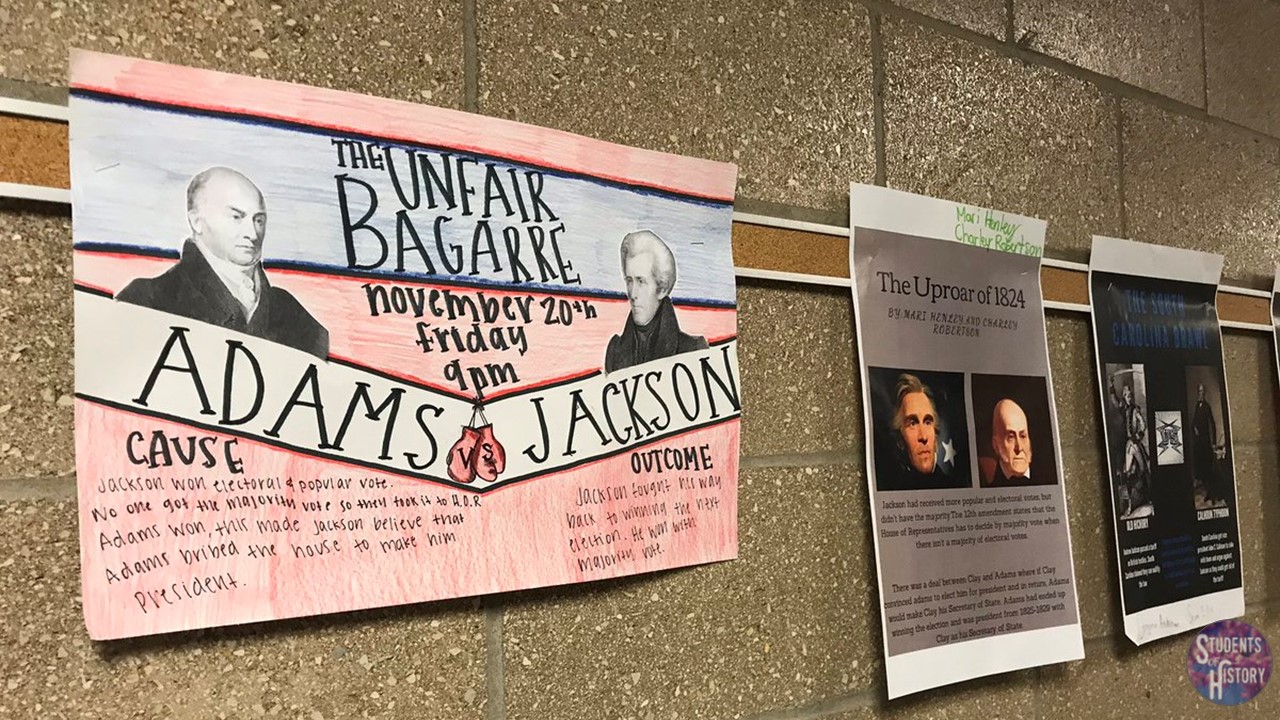 Jackson is well-known for his many “feuds”. He fought against the National Bank, bureaucracy, American Indians, caucus system, etc. Students need to understand each one to gain a perspective about how radical a change Jackson was from those who were elected before him.

To do this, I show students a few “fight cards” from famous boxing matches like “The Thrilla in Manilla” and “Rumble in the Jungle” and present them with this group project to create their own fight card for one of Jackson’s feuds.

I love the creativity kids have in these projects. They’re usually in small groups of about 3-4 and are provided with a reading on the feud. They can also research a little further and then design the poster with a slogan, images, the opponents, and an explanation of the results of the “fight” on the back.

I have digital notebook sets for all of US History and will use a few pages of them each unit. I generally go into the unit with a plan to use one or two, but if I find that students are struggling with a piece of the content, I’ll assign them another page to help reinforce the main ideas.

My Age of Jackson Digital Notebook has pages on the Spoils System, Indian Removal Act, Trail of Tears, Tariff of Abominations & Nullification, his Bank War, and more. So, no matter what aspect of the unit students might be struggling with, I have a page I can provide them with links to online sources and graphic organizers to help them visualize the content. 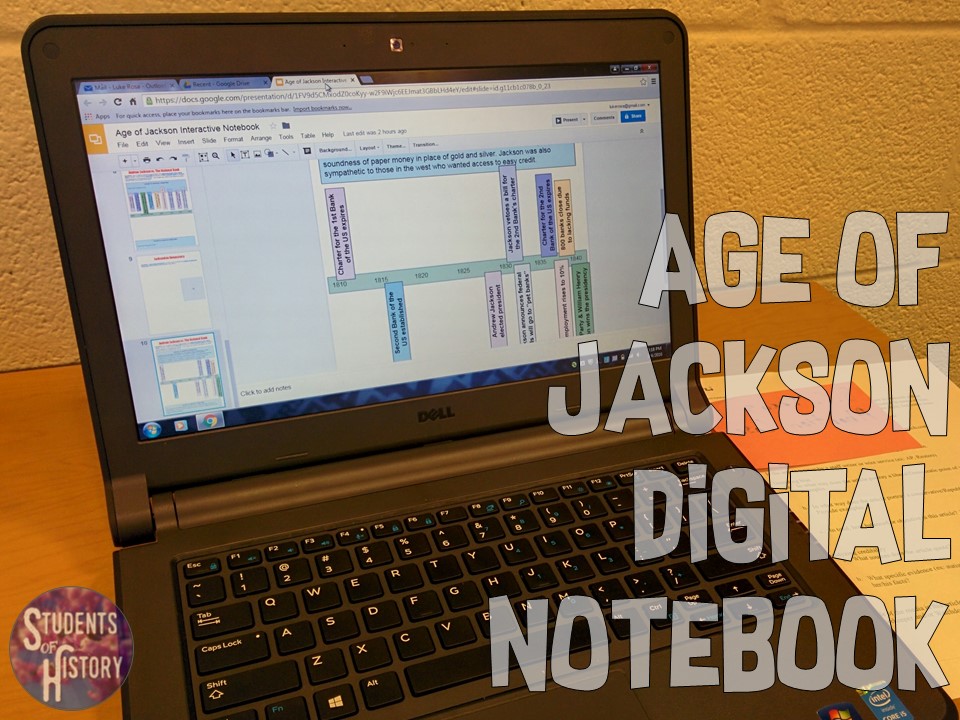 I especially like doing the Andrew Jackson timeline activity page. It’s great for helping students understand the Bank War and economic impact it had in the 1830s.

Finally, I want students to be analyzing primary sources to ensure my unit is rigorous and students are acting like historians in the classroom.

I love this primary source lesson on the Indian Removal Act so students can see the what the Act did as well as the perspective of those who protested against it. There are 10 brief excerpts from documents and speeches related to the Act from President Jackson, Cherokee Chief John Ross, Alexis de Tocqueville, soldiers, and others.

The sources can be used as stations around the room for students to move through or given to students in groups at their desks. Google Doc versions are even included for paperless classrooms!

Each primary source helps kids get a better understanding of the views regarding the removal of the Cherokee and other Native American groups from the southeast.

The lesson concludes with a longer speech from Gen Winfield Scott to the Cherokee Nation that students analyze.

That’s it! Hopefully some of these lesson plan ideas and resources can help you in your unit on the Age of Jackson! It’s such an important era in US History and bound to be a large part of any state testing on US History or your final exam.

All of these resources are part of my US History curriculum subscription with lesson plans for every day of the year in American History, along with videos, games, assessments, and more. 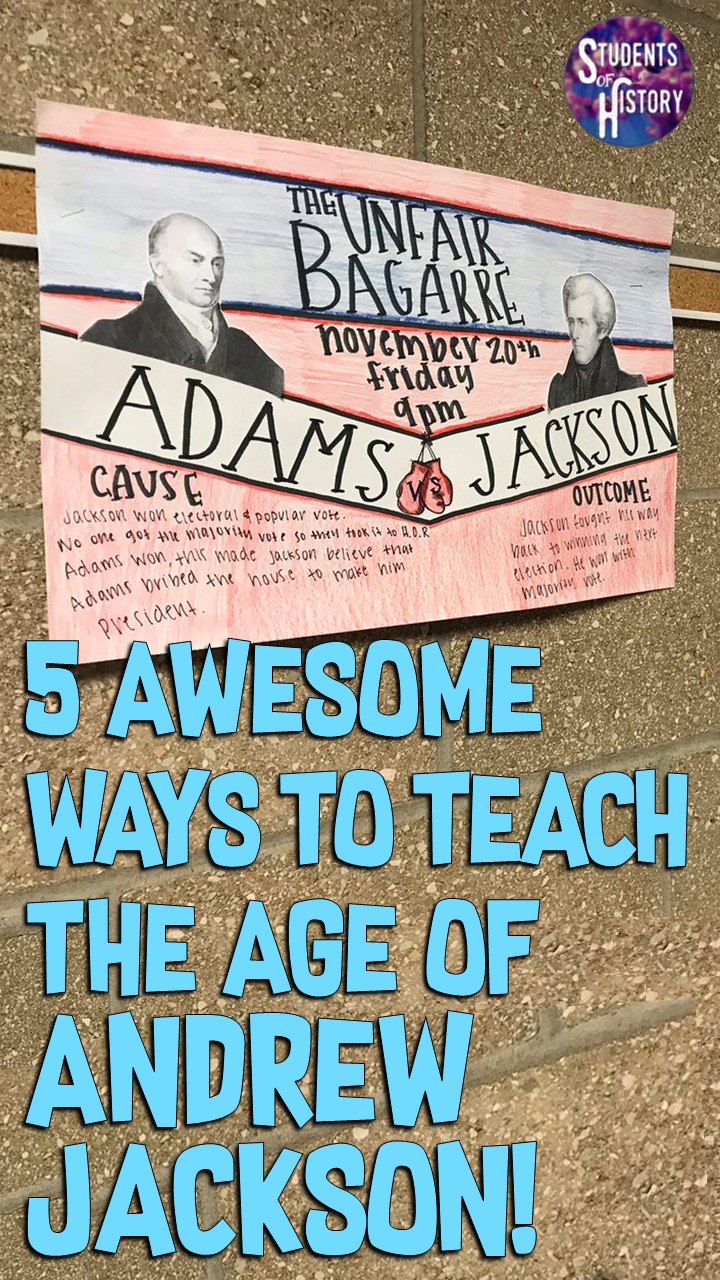 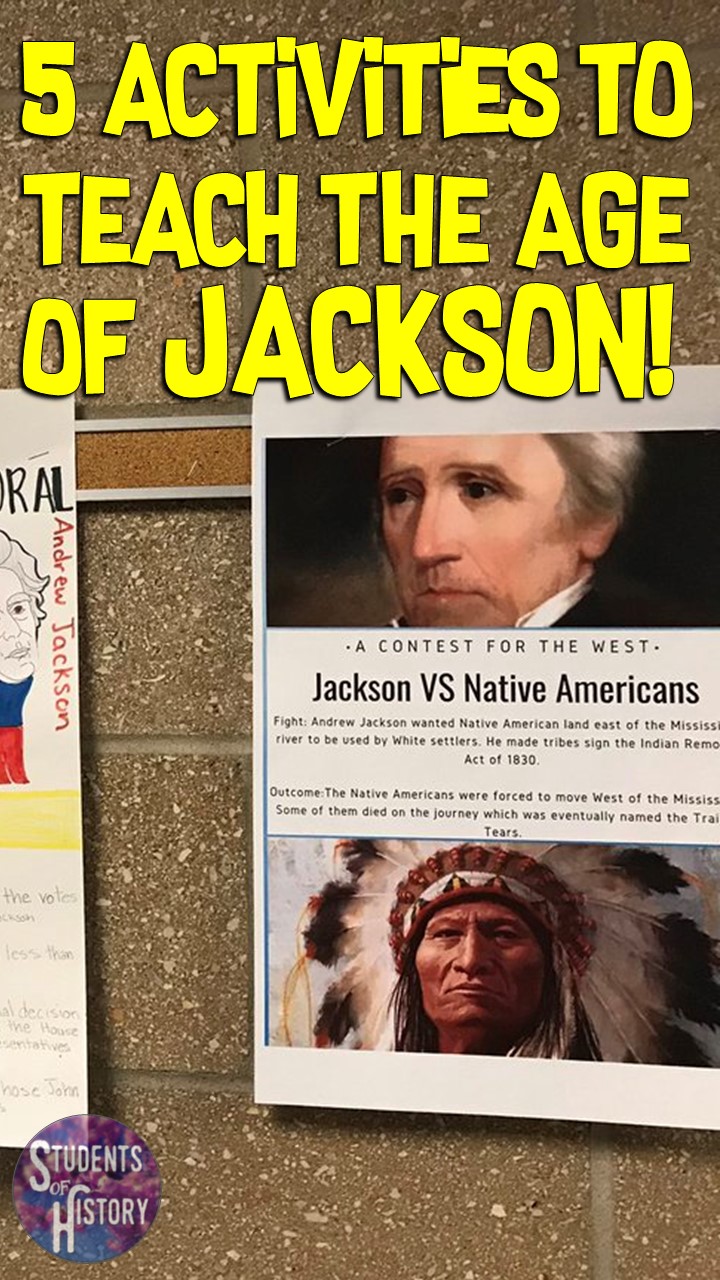 Want to try some lessons for free?

Enter your email to download over 30 pages of free, engaging social studies resources!
Don't worry, your information is never shared.